Learn how to program games with the LÖVE framework

Now we can start with what I like to call "The fun part". We're going to make stuff move!

Let's start with the 3 main callbacks.

Next, we draw a rectangle. 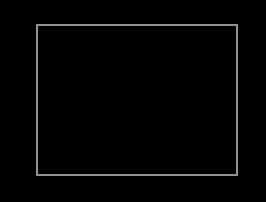 The second and third argument of this function are the x and y position.

x means "horizontal position on the screen". 0 is the left side of the screen.

y means "vertical position on the screen". 0 is the top side of the screen. 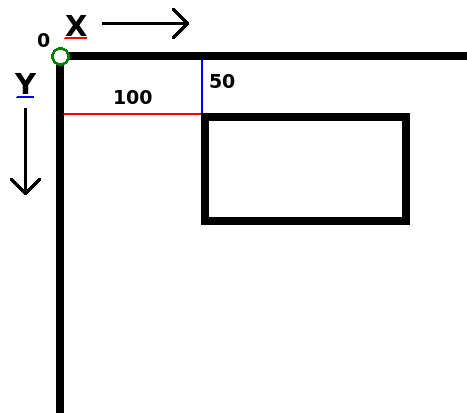 In love.load, create a new variable called x, and replace the 100 in love.graphics.rectangle with x.

So now the x-position of our rectangle is the value of x.

Note that the variable name x is just a name. We could've named it icecream or unicorn or whatever. Functions don't care about variable names, it only cares about its value.

Now we want to make the rectangle move. We do this in love.update. Every update we want to increase x by 5. In other words, x needs to be value of x + 5. And that's exactly how we write it.

Run the game. The rectangle should now be moving.

We got a moving rectangle, but there's one small problem. If you were to run the game on a different computer, the rectangle might move with a different speed. This is because not all computers update at the same rate, and that can cause problems.

For example, let's say that Computer A runs with 100 fps (frames per second), and Computer B runs with 200 fps.

Luckily, there's a solution for this: delta time.

When LÖVE calls love.update, it passes an argument. Add the parameter dt (short for delta time) in the love.update, and let's print it.

Delta time is the time that has passed between the previous and the current update. So on computer A, which runs with 100 fps, delta time on average would be 1 / 100, which is 0.01.

By using delta time our rectangle will move with the same speed on all computers.

Now our rectangle moves 5 pixels per second, on all computers. Change 5 to 100 to make it go faster.

We use a variable that we increase on each update to make the rectangle move. When increasing we multiply the added value by delta time. Delta time is the time between the previous and current update. Using delta time makes sure that our rectangle moves with the same speed on all computers.

Do you need help or do you see a mistake?
Leave a comment or edit this chapter.